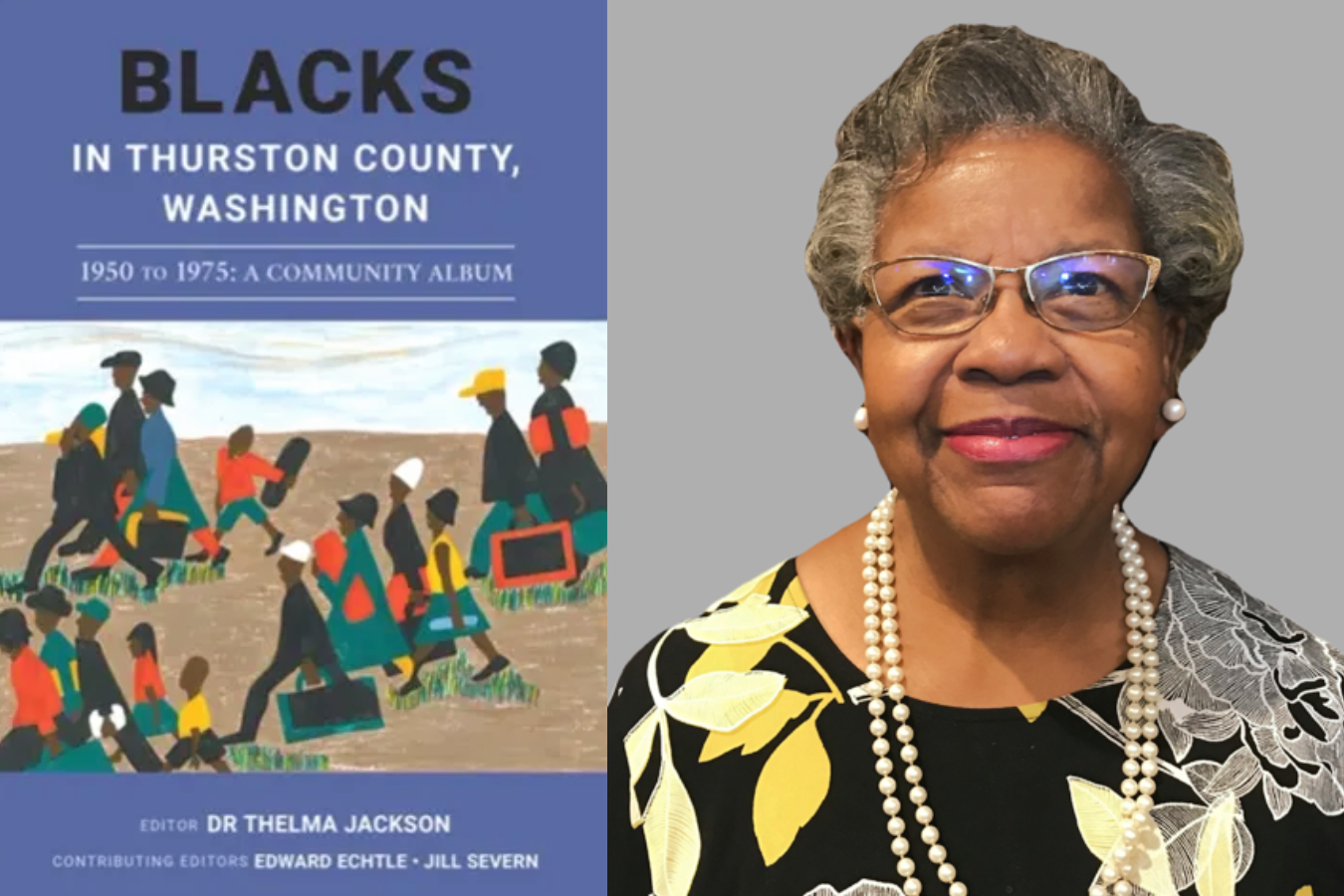 Just over a decade ago, Dr. Thelma Jackson realized something: even though she and her family had lived in Thurston County since the 1970s, they only ever heard one story about local Black history, that of pioneer George Washington Bush, who settled in this area with his family in 1843.

As a Black community leader, Dr. Jackson knew there were a lot more stories to tell. Her family had spent decades connecting with other Black people in the area and knew that many more had come before them. But stories about Black people simply weren’t part of the local history and lore; their experiences were, as far as documented history was concerned, invisible.

So Dr. Jackson decided to start interviewing community members. A former Community Foundation board member and nonprofit founder who has spent a lifetime advocating for equity in education and other arenas was invested, personally and as a citizen, in discovering what life was like for Black people in the middle of the last century. Over a ten-year period, she and a handful of other collaborators interviewed longtime Black residents of Thurston County—those who settled here during a 25-yearperiod—in order to capture their stories and publish them for the public.

This year, her idea came to fruition. She released her new book, Blacks in Thurston County, Washington: 1950-1975:A Community Album, during Black History Month at an event at the Lacey Community Center.

The book, which is now in its third printing, is a collection of 55 short profiles highlighting the experiences of Black individuals. According to the nonprofit organization that Dr. Jackson founded and runs, Northwest Institute for Leadership and Change, the book tells stories about residents’ migrations to the area in order to “help the reader to understand who were these Black people, where did they come from, what brought them here,...what challenges did they face, and what had life been like for them?”

Dr. Jackson conducted most of the interviews and estimates that she personally spent many dozens of hours conducting research and interviewing community members, both over the phone and in person. She and the other interviewers coordinated their approach, asking each person, for instance, where they migrated from, what brought them to the area, where they lived, and what kinds of difficulties or challenges they faced.

One glaring pattern emerged when the interviewers came together, compared notes, and shared community members’ stories.

“Later on,” she explains, “I discovered the existence of racially restrictive covenants on a lot of pieces of property—that still exist.” Racially restrictive covenants are statements that were permanently incorporated into documents such as property deeds that restrict land ownership to White buyers or forbid sales to Black people. Some also prohibit sales to people of other races. “That explains why most of the Blacks in Thurston County live out in the Lacey area.”

Over the years, Dr. Jackson has heard many White residents say they believe Black people live in Lacey because of its proximity to the military base. But based on her research, Dr. Jackson rejects this assumption. “Lacey was a young city. It didn’t have these racially restrictive covenants on property. You had developers and realtors who showed Black folk properties out in [the Lacey] area,” which wasn’t incorporated until late 1966.

As a result, very few Black people lived in Olympia or Tumwater in the 1950s and 1960s. Some people commuted from as far away as Tacoma. Others managed to find housing through the help of White allies who, for instance, viewed properties on their behalf.

According to the Thurston County website, seven known neighborhoods in Thurston County still include racially restrictive language on formal documents, such as plat maps and neighborhood covenants. Today, these restrictions are illegal at the federal and state levels and are no longer enforceable. However, their existence points to historically racist policies that kept Black Thurston County residents from finding housing. (Through the auditor’s office, current property owners can opt to formally modify such covenants to make clear that they reject the original language.)

How the book came together

Though Dr. Jackson conceived of the book idea and led it to completion, she credits many with its release and success. In addition to her fellow interviewers, she collaborated with local historian Edward Echtle and worked closely with Centralia-based Gorham Printing.

The cover features an image by Jacob Lawrence, a modernist American painter and one-time University of Washington professor whose work features vivid portrayals of Black life.

The book project was supported through a Thurston County Heritage Grant, which allowed Dr. Jackson to purchase digital recorders and other equipment. In the fall of 2021,the project also received a grant from the Community Foundation to help the team of collaborators usher the project to completion.

“We were excited to support this project,” says Community Foundation President and CEO Mindie Reule. “Dr. Jackson’s book highlights the (too often overlooked) stories, histories, and accomplishments of Black residents of Thurston County.”

The future of local Black stories

This book is just the beginning of the work that needs to be done in order to unearth and learn the historical stories of Black residents in Thurston County. There was a100-year gap between the time when the Bush family settled north of the Columbia River and the stories printed in Dr. Jackson’s book.

Archival evidence of Black residents during that time exists but has yet to be researched and fleshed out into historical narratives. And from 1975 to the present, there are countless stories to be told.

For the time being, though, Dr. Jackson says the stories they were able to capture are important for our community to celebrate and also to consider as we try to become a better place for everyone to live.

“Hopefully, it opens up some conversations, some courageous conversations, about not only what was but what still is,” she says. “And, you know, everybody now talks about diversity, equity, and inclusion: DEI, DEI, DEI. What does that mean? What must be done differently in our cities and our communities, in this county? If we truly—given our rate of growth, given the increased diversity of who’s coming here—if we truly want to be diverse, equitable, and inclusive, what must we do differently?”

Purchase a copy of Blacks in Thurston County, Washington directly or pick up a copy in downtown Olympia at Browsers Bookshop.