Fighting Hunger on the Frontlines of COVID-19

Read how Thurston County Food Bank is finding new ways to reach the people who can't reach them. 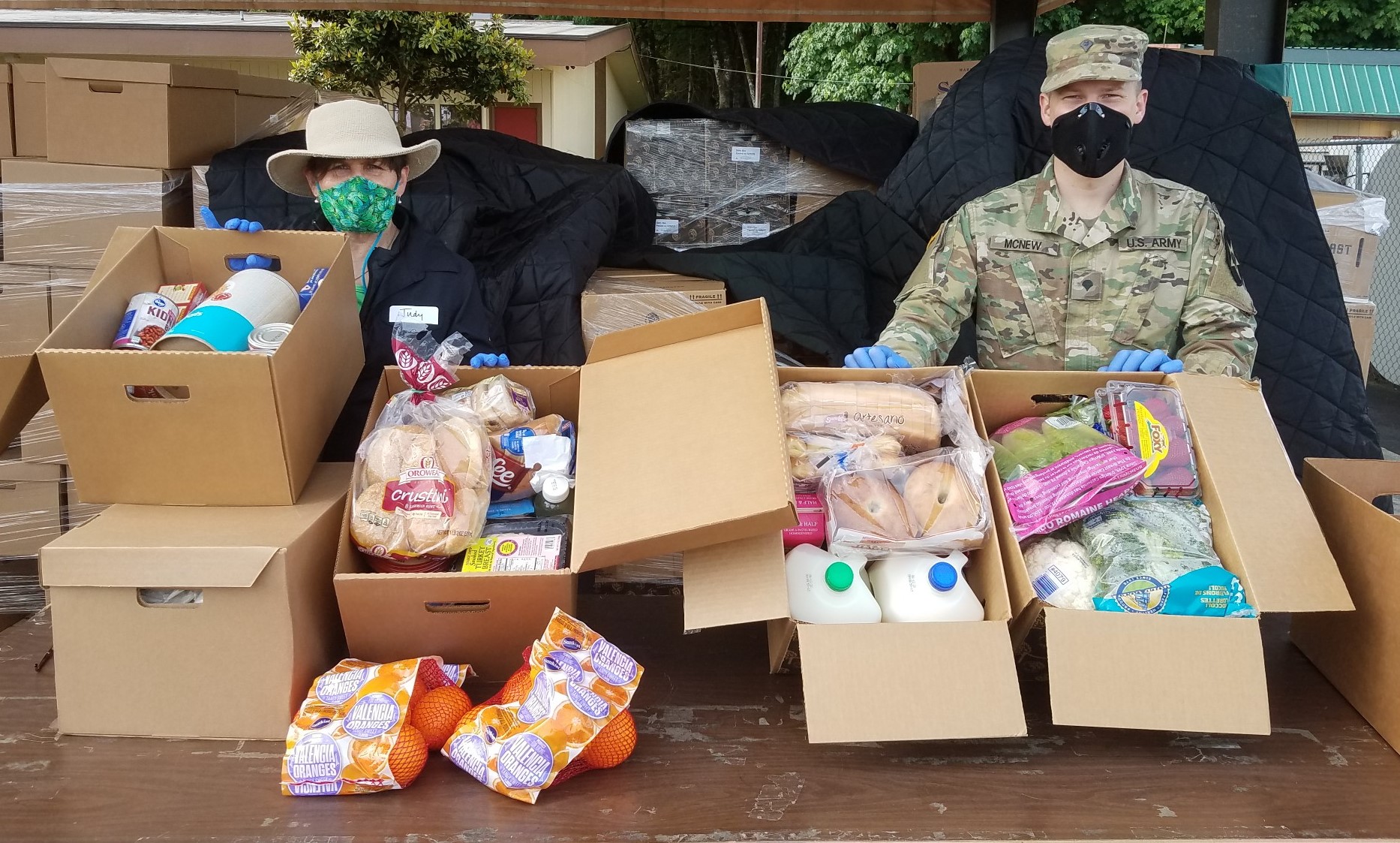 Spring of 2020 was a whirlwind for everyone. For Thurston County Food Bank, it was also like stepping into a time machine for an unwanted journey back to old ways of doing things—ways they'd abandoned on purpose. As the world around them spun wildly off-kilter, Food Bank staff watched decades of progress unravel so fast it was dizzying.

The mission of Thurston County Food Bank is to eliminate hunger within our community. Since 1972, when the Food Bank was established, they've worked to fulfill that mission through an ongoing exercise in experimenting, adapting, and improving their methods. Over the years, they shifted focus from quantity to quality, recruited a robust volunteer base, and added more fresh options. By 2010 they'd moved away from distributing pre-packaged boxes in favor of a more dignified choice model. Empowering hungry people to choose what they wanted to eat helped the Food Bank reduce costs and waste. Recent upgrades to their infrastructure also allowed them to open a waiting room downtown so clients could wait indoors— an especially welcome change for those needing food during Olympia's dark rainy winters.

The pandemic upended much of that progress. A full 48-person capacity waiting room was too risky with a rapidly spreading virus on the loose. The Food Bank was back to distributing food outside, even in inclement weather. They had to abandon the choice model as well. Rewinding 10+ years and returning to pre-packaged boxes was frustrating for everyone. It was also costly. Between supply issues and the cost of boxes to support the pre-packaged model, the food budget tripled. Not only that, about 85% of the volunteers that Thurston County Food Bank relies on for distribution dropped out, at least temporarily.

"Most of our volunteers are retired," Food Bank Development Director, Judy Jones, explains. "Being older, they were high-risk. This is frontline work, and being on the front line there was an expectation that all of us would be exposed to COVID-19 at some point."

The challenges were overwhelming, but the Food Bank was not without allies. Many in the community, including the Community Foundation of South Puget Sound, recognized the Food Bank's frontline role in the crisis and quickly increased their support to offset the costs of adapting. "When we established the Community Response Fund, we wanted to fund immediate basic needs for people who were experiencing the economic effects of COVID," says Mindie Reule, Community Foundation President & CEO. "Mostly, that meant keeping people in their homes and keeping them fed. The Food Bank played an essential role in that."

As the unsettling reality of COVID-19 set in, Thurston County Food Bank prepared to fill that essential role by doing what they've always done: experimenting, adapting and improving their methods. "We still didn't understand everything," says Judy, "but we knew two things: we had to do more and we had to do it differently." Equipped with that flexible attitude, the Food Bank began experimenting, starting with a downtown drive-up distribution site twice a week, as well as a walk-up option.

At first, not many people showed up. "We were baffled," Judy recalls. "We knew there were hungry people and not enough resources, but they weren't showing up for food." Together, the team brainstormed reasons why people weren't coming for help, trying to decipher the issues so the issues could be fixed. In the end, it came down to fear and uncertainty. People didn't want to leave home to get food downtown, especially in the early days of the pandemic. Thurston County Food Bank needed a way to help folks feel safer and more comfortable, so they went into the neighborhoods and opened new pop-up sites. They expanded their drive-up model and made it more efficient, creating a no-contact system so people could stay in their cars. They also improved the walk-up model, adding markings on the ground so that those arriving on busses and bikes and foot from the neighborhoods could safely access food and stay distant.

In addition to sorting out the logistics, they faced the too familiar challenge of overcoming the stigma that often exists around going to the Food Bank. A food bank is a resource for everyone in a community, and there's truly no predictor of who will need that resource at some point. As COVID-19 has demonstrated, the circumstances that lead a person to the Food Bank often arise unexpectedly, catching many off guard.

One 82-year-old man at a drive-up distribution site broke down in tears when asked how he was doing. He'd been through a lot recently, including three surgeries that left him with bills he'd spend the rest of his life paying off. "I've never had to ask for help before," he said. A mother in line for food explained that she considered her family to be middle class. They'd never needed the Food Bank, but on top of the economic stressors of COVID-19, her husband was going through cancer treatments. Thurston County Food Bank responded to both of these stories with the same message of welcome they extend to everyone, regardless of background or circumstances: "We're so glad you found us."

Some can't find their way to Thurston County Food Bank, so the Food Bank is finding new ways to reach them. Typically, about 850 local seniors receive federally funded food boxes each month, but COVID-19 has made it unsafe for this high-risk group to pick up food downtown. The Food Bank had never delivered these boxes before, but they decided to give it a try. Now, they're delivering 500 boxes a month. Chances are they'll continue deliveries after the pandemic is over, because they've learned it's needed and works.

"For forty-eight years, we've adapted and changed and evolved," says Judy Jones, "but with COVID we've become nimble. We're learning new practices and strategies that will make our work better. These are things that will improve our impact long into the future—and we weren't trying to do that, really, we were just responding to the need."

One significant way Thurston County Food Bank has improved in response to the need is expanding partnerships. Working with local school districts, including Capital Region ESD 113, which runs Head Start programs, has improved the Food Bank's reach and effectiveness. "Many Head Start families struggle with food insecurities during non-pandemic times," says Patricia Barrett, ESD 113 Food Service Director. "When the stay-at-home order took effect and children were no longer getting meals at school, we knew we had to do something to help."

She reached out to Thurston County Food Bank Executive Director, Robert Coit and the two started to discuss how they might partner. "We were already making door-to-door deliveries of education materials and school lunches," Patricia explains, "so we pulled our team together to add the distribution of food bank supplies. As we refined our systems, we were able to offer full-size satellite boxes with fresh produce to the doorsteps of our families. Building this partnership in the community provided our staff with meaningful work and made an impact on the lives of the families we serve."

Children's voices often go unheard in conversations around food security, so it was crucial that local schools spoke up on their behalf. That commitment to kids' well-being was not lost on the families. ESD 113's dedicated delivery staff received a heartwarming response. "Parents and kids rush to the door and say that me showing up and our program preparing and delivering food is a highlight of their quarantine weeks at home," says Janell Snider, Rainier Head Start Center's bus driver who was instrumental in getting food boxes out to some of the most rural homes in Thurston County.

“The families of our program’s children are our families also," says ESD 113 Superintendent, Dr. Dana Anderson, "and our core mission is to do everything we can to serve them equitably.” Through their partnership, both ESD 113 and the Food Bank were able to serve those families much better than they could have done on their own. Together, they delivered food to the homes of nearly eight hundred young children, helping families in our community survive a hard year.

As crucial as these new approaches were, they all came with extra costs that had to be funded. Federal funding has helped, but the accountability and management needed to administer federal dollars is a lot to take on. Local cities, Thurston County, and organizations like the United Way and the Community Foundation of South Puget Sound answered the call to steward the necessary funds to meet community needs. Help from these funding partners relieved the administrative burden, allowing Thurston County Food Bank to focus on feeding hungry people.

Individuals were generous as well, increasing their donations throughout the year. In November, Thurston County Food Bank participated in Give Local, an annual local giving campaign hosted by the Community Foundation of South Puget Sound. Their $10,000 goal was an ambitious one, especially as the economic impact and fatigue of an ongoing pandemic stretched into the ninth month. Undeterred, the community rallied in support of food security for their neighbors, doubling the goal and then tripling it, for a total of over $30,000.

According to Judy Jones, the community's love and generosity has given those on the front lines the hope, optimism, and determination they need to keep showing up. "There have been many inspiring moments," she says. "It takes awhile for the federal help, the government help to arrive, but we've had people right from the start who knew our community couldn't wait. They said, 'People are hungry today. They were hungry yesterday. We can't let them be hungry tomorrow.' So it was encouraging to see that so many in our community have the same goals and commitments to go the distance."

We are thrilled to support 84 nonprofits through this annual grant program! Learn more and join us in celebrating the excellent work of this year's recipients.

Resilience Fund Grant disbursements are now complete! Read about how, coming together, our communities responded to the challenges caused and amplified by COVID-19.