The Looking Back, Moving Forward Project Draws on History to Inspire Community Dialogue on Race

THIS POSITION IS NOW CLOSED 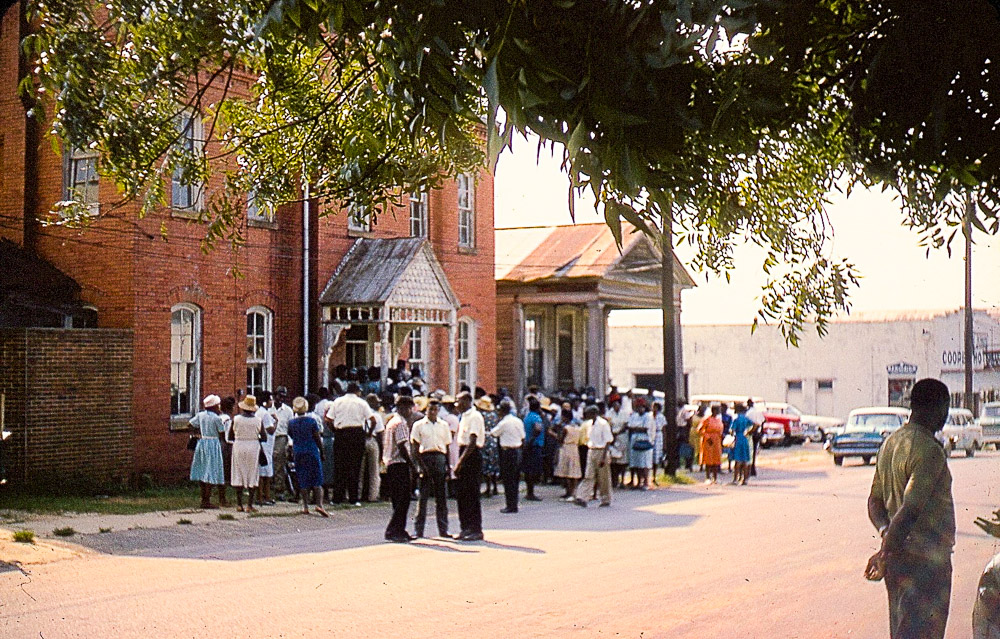 (Above) Wilcox County, AL: Despite the heat, ongoing segregation, barriers of prejudice, and threats of retaliation, citizens line up outside the old jail in Camden, waiting for a chance to register as voters for the first time in their lives

This is the story of how some old memoirs, friendships, and a grant from the Community Foundation of South Puget Sound are bringing personal stories from the 1965 Selma-to-Montgomery voting rights march to life as a community resource. Together, members of our community are transforming history into an ongoing dialogue on racial justice, engaging the next generation, and inspiring change.

Something to do with Selma: Crossing Paths at the Voting Rights March

On March 20th, 1965, a white school teacher from Tillamook, OR, named Dave Evans boarded a midnight plane in Portland. His multi-legged flight would take him through Chicago and Atlanta en route to Selma, AL, in support of Dr. Martin Luther King Jr., and the fight for civil rights.

Growing up in Wahkiakum County, WA, Dave hadn't known many African Americans in his childhood, but he'd known one—a young girl who attended his elementary school. Looking back, he knew his classmate was excluded by others, including himself, and he forever regretted that exclusion. More recently, he'd seen disturbing images on the news—images of Black Americans in Selma being attacked with tear gas and clubs.

"I felt bad about that too," Dave wrote for the Tillamook Headlight Herald. "And it seemed to me that Wahkiakum County and Tillamook County had something to do with Selma. It seemed that these distant rural communities shared the responsibility or blame for the recent shocking occurrences in the South." When he and his family heard about an upcoming voting rights march from Selma to Montgomery, they felt this would be an opportunity to acknowledge that responsibility and help correct some wrongs. They chose Dave to represent them.

In Selma, a Black family named the Goodwins, sheltered him in their apartment. The family had three daughters, and as you might expect of a teacher, Dave noticed them. "Nice little kids," he wrote in his journal, "Bridget (4), Gwendolyn (8), and Rose (13)". More than a nice little kid, Rose Goodwin was a freedom fighter in her own right. Given a school assignment to "write a poem telling how we fear being a Negro in Selma," she wrote, "Many people, men, women, and children have died for their freedom and our freedom...In a sense, I am glad they died doing something in which they thought was right instead of doing what was wrong."

Rose was also a participant in the voting rights march and recorded the experience in her diary. In her clear-eyed way, she related the marchers' determination and the brutal injustice that opposed them. “After we couldn’t go across the river," she wrote, "we knelt down and started to sing ‘We Shall Overcome'... The troopers started hitting people across the head and throwing tear gas at us." To escape the violence, Rose and her friend ran down an embankment into a pasture of grazing cows. Some troops on horseback followed. They "told the horses to bite us and run over us," wrote Rose, "but the horses wouldn't do it." Rose and her friend were spared being trampled, but the state troopers and other law enforcement officers continued their attack, cheered on by the laughter and jeers of white bystanders.

After the march, Rose's diary and poem were entrusted to Dave Evans who kept them in a manilla envelope alongside his own journal and the testimony of a third marcher—an unidentified man from a parish in Oakland, California. The first-hand accounts of these three people from different backgrounds and locations who'd crossed paths in a pivotal moment in American history waited quietly for 55 years in Oregon before they were uncovered again.

From History to a Community Resource for Dialogue and Change

After Dave's death, his widow, Peggy, discovered the memoirs. She realized the stories were significant, but didn't know what to do with them until she attended an event on racial unity with the Olympia Baha'i Community in 2019. Lonnie Locke—a woman who'd known Peggy for a long time—was presenting at the meeting. When Peggy learned her friend had grown up in Alabama, she passed the memoirs on to Lonnie hoping they could do some good. "I was awed reading them" says Lonnie, "Selma is 50 miles away from where I grew up, and these events happened a year after I left Alabama in 1964. I'd heard from my family what was going on there, but not in the detail the memoirs contained."

As Lonnie kept her eyes and ears open for opportunities to utilize the stories, the threads began coming together. She connected with a number of community members and partner organizations, including John Worcester, a local resident who'd also supported voting rights in AL in 1965. Other support came from Amber Huffstickler; Windowseat Media; Heartsparkle Players; North Thurston Public Schools; Asian Pacific Islander Coalition, South Sound Chapter; Community Café Collaboratives; and the Spiritual Assembly of the Baha'is of Thurston County. In January of 2020, the Community Foundation of South Puget Sound awarded a grant to support the evolving project. Empowered by these community funds and partnerships, the Looking Back, Moving Forward Project was born. The project's goal is to bring people together for dialogue on racism and its systemic impact, to eliminate prejudice, and to take community action for change.

While Looking Back, Moving Forward was still in its early stages, the COVID-19 pandemic hit, throwing all plans into disarray. They were forced to rethink their strategy and shift from in-person to online gatherings. Meanwhile, the pandemic was causing disproportionate harm to People of Color and highlighting ongoing inequities in new and disturbing ways. Then, on May 25th, 2020, the horrific death of George Floyd at the hands of Minneapolis Police officers was captured on video. Quickly, the need for more community conversations and solutions to address racism gained prominence in both national and local conversations.

"I've been doing this type of work a long time and never had an experience like this," says Lonnie. "Everything happening in the world, as unfortunate as the circumstances have been, has been a catalyst to go deeper into information that's been there a long time and to uncover inequities that had been covered up. I've discovered like-minded people in our community who want to engage."

In 2020, the creation of the Dialog to Transformation website gave the Looking Back, Moving Forward Project a virtual home for the Selma memoirs. The group also compiled an anti-racism toolkit, a photo library on the history of voting rights, and a reference collection of readings and videos for people who want to dive deeper into the history of civil rights and racism in America. "My hope," Lonnie says, "is for everyone to see the website as a community resource."‍

Engaging the Next Generation of Change-Makers

In early 2021, a new opportunity emerged through another community member who introduced Lonnie Locke to Lynda Blackmon Lowery, author of the book, "Turning 15 on the Road to Freedom: My Story of the 1965 Selma Voting Rights March." They partnered with North Thurston Public Schools to host a virtual event on February 4th, 2021, called "Youth as Agents of Change." The event was free and open to the community, but it was especially focused on students. "Historically, youth have always played a key role. They've been at the forefront of change," Lonnie explains. "We wanted our kids here to see the part they can play as agents of change today."

After Mrs. Lowery's talk, North Thurston students joined her for a thoughtful Q&A. In response to her disclosure of how the blatant injustices she endured turned her into "a very angry 14 year old," one student asked, "How did you heal that angry girl?"

"It took me a while," she responded, "but I think that the movement itself helped to heal me. I was able to meet a different type of white person that respected my father and my grandmother and other People of Color. I was able to meet people that came and stayed with us and slept on our floors and ate the same food we ate. That was one of the things that the movement gave me —a different person to see." In response to the evening's final question, Mrs. Lowery shared that telling her story was another step toward healing. "I needed to tell my story," she explained. "And it took them almost eight years to get my story out of me, because I had tried to hide it for years so I wouldn't have to deal with the things that had happened. I found that when I started telling my story, I started feeling lighter. I got rid of that hatred. I got rid of that anger, but I am still working on getting rid of the hurt.

Mrs. Lowery's story along with the Selma memoirs have filled in some gaps for Lonnie Locke too, helping her better understand what happened after she left Alabama as a teen girl seeking an escape from the chaos, pain, and traces of trauma that still linger. "The integrated bus that brought me to Washington was the only evidence of change I saw on leaving. My life there was immersed in fear, poverty, and internalized racism. I was part of that migration journey from the South that so many African Americans made seeking freedom and human dignity."

The search for freedom and human dignity is ongoing, and the work is not over. Recognizing this, the Community Foundation of South Puget Sound is grateful for the Looking Back, Moving Forward Project and to Lonnie Locke for the incredible effort she puts into this labor of love. We're honored to have played a small part in helping bring this project to fruition and know it will be a powerful resource for our community. We have much to learn from our past and believe that history and personal stories have the power to heal, remind us of how truly interconnected we are, and to guide our collective work for a better future.